Part fiction, part fact, The Lost Moon project is a series of photographs re-imagining and re-telling the stories of the whereabouts of some of the rocks from the Apollo Goodwill Moon Rock gift programmes of the early 1970’s. At one stage about 180 of the 270 lunar samples distributed by the Nixon Administration were either, missing, misplaced or stolen. Amongst the collection of anecdotal information on these lost, or once lost rocks you’ll find everything from unlikely heroes and greedy villains, to tragedy, triumph and even luck.

Concealed almost entirely underneath a layer of thermochromic black ink, the physical nature of the photographs reflects the fragmented history of these lunar samples and also the current political instability of the moon itself. The Lost Moon photographs only reveal their content when heat is applied to their surface, for it to disappear once more as they cool, creating works which are both stable and unstable.

This series was originally produced for FORMAT 15 International Photography Festival in Derby as part of a group show of alternative and historic photographic techniques.

Click on a thumbnail to find out the background story behind each missing or recovered rock fragment. 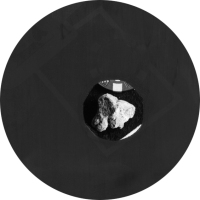